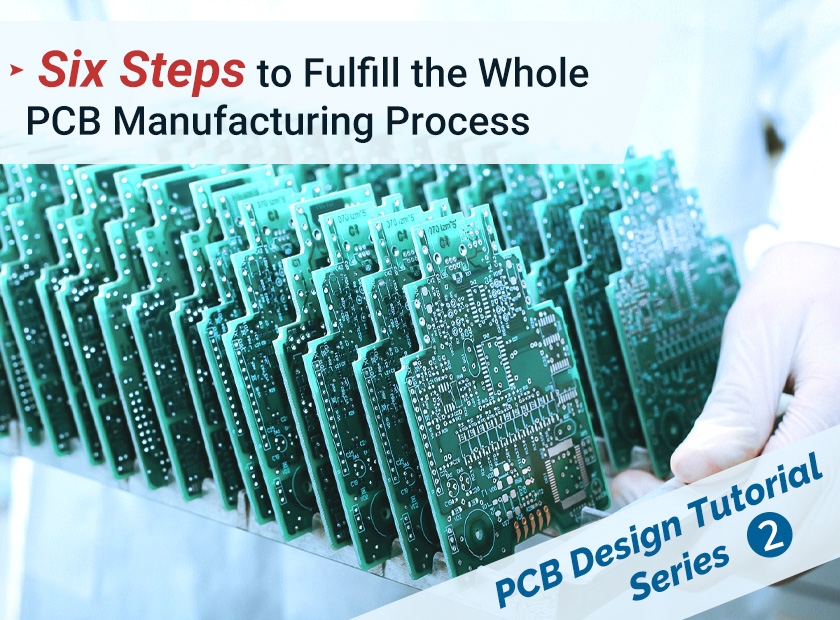 In the previous article, we’ve discussed about details in designing a PCB. Then comes the second and meanwhile the most tricky part - PCB manufacturing. Printed circuit boards (PCBs) are the basis of most modern electronic devices. They have wiring and pads connecting individual points together. Generally speaking, it takes 6 steps to make a PCB. Now, we will introduce them one by one through pictures.

The first step of PCB manufacturing is to organize and check PCB layout. Each CAD software has its own unique file format. CAD files should be converted into a unified format - extended Gerber RS-274X or Gerber X2. Then PCB layout should be checked whether it conforms to the manufacturing standards or bears any defects. The PCB layout can be printed on paper with a laser printer and then transferred to a copper clad plate. In the printing process, the printer is prone to lacking ink or creating breakpoints, so it is necessary to manually replenish ink with an oily pen.

Clean the copper plate. Dust may cause a short circuit or a broken circuit. PCBs with different layers require different amounts of copper clad plates and copper films. Take an 8-layer PCB for example. It is made of 3 copper clad plates plus 2 copper films, which are then bonded together with prepreg. The production sequence starts with the middle board (Layer 4 and Layer 5 circuits) which are stacked together layer by layer. The 4-layer PCB is similarly made, including a core plate and two copper films.

Align holes in the core plate for lamination with other materials. Once the core board is laminated with other laminates, it cannot be modified. That’s why PCB inspection is necessary and very important. At this stage, the first two layers of PCB board have been made successfully.

Since almost all PCB designs use perforations to connect different layers of wires, a 25-micron copper film needs to be laid on the hole wall. The thickness of the copper film is decided by galvanization. The pore wall consists of non-conductive epoxy resin and glass fiber board. So the first step is to deposit a layer of conductive material on the pore wall, and chemical deposition forms a 1 micron copper film on the entire PCB surface.

Transfer the PCB outer layer to the copper foil. The process is similar to the transfer process of the previous PCB core board. The PCB layout is transferred to the copper foil by using photocopying film and photosensitive film.

The PCB is covered by a cured photosensitive film as a circuit to clean the uncured film. After etching of the exposed copper foil, the PCB layout circuit is protected by a cured film. The transfer of the outer PCB layout adopts the normal method. The non-circuit area is covered by a cured photosensitive film on the PCB. After cleaning the uncured film, electroplating is performed. Where there is a film, it cannot be electroplated, and where there is no film, it should be plated with copper before tin. After the film is removed, alkaline etching is performed and finally the tin is removed. Finally, the tin-plating layer on the copper foil of PCB layout should be removed and cleaned with tin-stripping liquid.

After all these complex processes, a 4-layer PCB is completed at last. This whole process involves many sophisticated details like chemical treatment and cleaning that need to be controlled by computers to ensure accuracy.

As one of the most experienced PCB manufacturers in China, Elecrow provides a full range of PCB manufacturing services to meet all your PCB needs. The quality of the PCB is our core concern, Elecrow has a mature system such as ISO9001 certified procedure, and various testing methods to ensure manufacturing your PCBA with high quality.

Elecrow has launched a big summer promotion for PCB and PCBA recently with PCB prototyping starting at $1. Free assembling for PCBA orders with a quantity less than or equal to 10pcs. Come and get your first PCB!